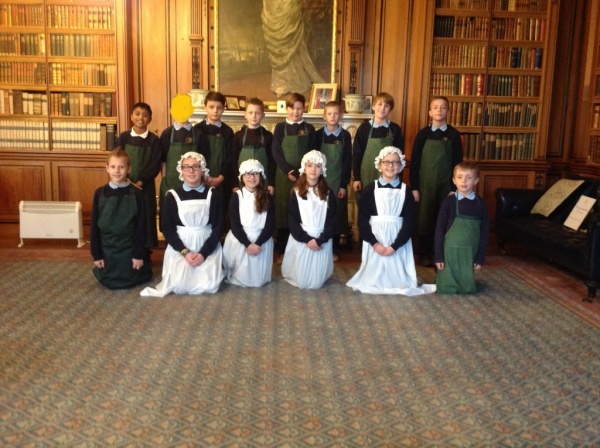 On Tuesday 14th March, Primary 6 ventured out into the countryside towards Methlick to the stately home Haddo House. Pupils learned about the history of the house including the Victorian renovations. Pupils imagined they were servants as they explored the house where they were given access to the servants’ corridors so as to experience the class divide.

Pupils commented on how enjoyable the trip was and will look forward to using these experiences to aid in their learning before Easter.

To continue the Victorian theme, on Thursday 16th March pupils played VIctorian games such as “Tiddlywinks” and “Jacks” during our drama session with Mrs. Hutton. As the term draws to a close, pupils are finalising their personal projects on Victorian Childhood where we have been comparing Victorian experiences to our own. Thank you to all the parents for your support.

During the Victorian topic, pupils have made thaumatropes. The thaumatrope is a disc or card with a picture on each side which is attached to two pieces of string. When the strings are twirled quickly, the two discs spin round and animate the pictures! A popular Victorian thaumatrope featured a picture of a bird and a cage. When you spun the thaumatrope, the two images became one and it would appear that the bird was actually in the cage.

The children wrote instructions to make the thaumatrope. They also completed an imaginative piece of writing, pretending they were explorers on the HMS Beagle like Charles Darwin. Pupils have also considered Victorian housing, the social class system and its impact on holidays and education We have also explored the life of Queen Victoria and the British Empire. In the next couple of weeks, we will look at Victorian money and complete a piece of persuasive writing as well as exploring further the industrial revolution and Victorian schooling.