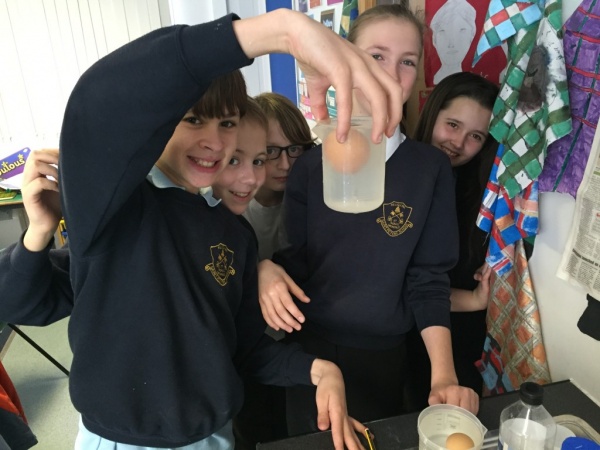 As we approach the end of Term 3, we are reflecting on our learning. This has been a really busy term with so much to fit it; it has flown by and we can’t believe we are nearly at the end of our primary school experience.  Over the past term, we have studied the Jacobites and the Scottish Wars of Independence, shared the journey of August Pullman in ‘Wonder’, started preparation for the Sacrament of Confirmation, won the local heat of the Rotary Quiz, competed at the Junior Maths Challenge and much much more!

We have been studying shape, position and movement. We have explored the properties of shapes, the nets they are made from and the angles within these shapes. We have also become more comfortable when working with co-ordinates and plotting points on the x and y axis. 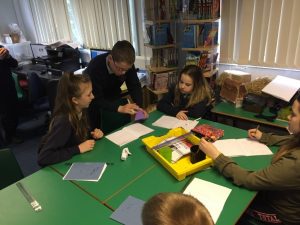 We really enjoyed exploring symmetry in more depth and have taken part in work where art meets maths! We have continued to work through mental maths activities every day, using different strategies each week to make us better at recalling our number facts.

Eno, Oliwier and Kacper represented the class at the recent Enterprising Maths Challenge at Elphinstone Hall in Aberdeen University. They created a super poster about the different ways to measure temperature and took part in a range of problem solving activities. Well done! 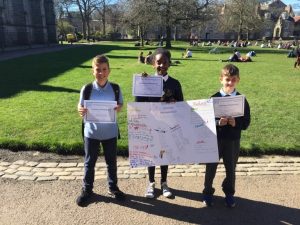 One of our pupils shared some of his work with us. He prepared a talk, PowerPoint and maths activity on the topic of Topology. It was interesting to know that topology is the mathematical study of shapes which are topologically equivalent. Two shapes are said to be topologically equivalent if one can stretch one into the other continuously without any joining or tearing. He gave us an example that a mug and a doughnut are two shapes that can blend into each other without losing its core properties. We then studied different 3D shapes such as a tetrahedron (four faces), cube (six faces), octahedron (eight faces), dodecahedron (twelve faces) and icosahedron (twenty faces) and compared their properties. It was a great way to round off our study of shape!

Our novel study ‘Wonder’ has been the context for most of our literacy work throughout term 3. We have really enjoyed reading through this book which has taught us so much about the struggles some people go through on a daily basis. It has encouraged us that, if in doubt, you should always “choose kind”. We have taken part in lots of different activities in order to get to know the characters better such as:

We have also used our reflective reading skills whilst studying ‘Wonder’. This involved us using different comprehension strategies to develop our discussion of the book and deepen our understanding. These strategies are:

We have also used our Jacobite topic as a context for our writing. We have written newspaper reports, recounts, letters to our 1745 self, created ‘Wanted’ posters and much more.

We visited the Special Collections Centre in the Sir Duncan Rice library a for a workshop. This was great as we learned about the Rout of Moy through drama, art and discussion. We also got to see an original letter written by Bonnie Prince Charlie. It was a letter ordering a payment be made to one of his servants and we noticed he signed the letter Charles P. The P stands for Princeps which is Latin for prince. This is like the Queen signing her letters Elizabeth R. The R stands for Regina, the Latin for queen. 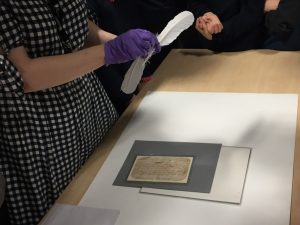 Well done to our Rotary Quiz winners! Our team worked and studied really hard to win the St Machar ASG  (Associated School Group) heat. They now go through to the next round, competing against schools who won their local heats throughout Aberdeen City and Aberdeenshire.

We became employees for the morning at the Apple Store in Union Square! After being given our uniforms, we were out on the shop floor learning about the new state of the art apps that can really aid our learning. It was so much fun. We worked in groups to create a story book animation. Each group had different tasks. There were the animators, the musicians, the book creators and the filmers. To do this we used the iMovie, Sketches Pro, Animation HD, Garage Band and Book Creator. In the end we were given a certificate, kept our apple t-shirts and a cool apple USB to save all our work. It was great!

We have been busy in Science this term too! We have tried lots of experiments over the past few weeks and shared our learning with the rest of the school during our Science walks. It was great to see all that is done in the school in Science and there are definitely some scientists in the making!

We discovered that you can inflate a balloon by mixing vinegar with bicarbonate of soda.

The reason this is possible is because, when you mix an acid and a base, you produce a different substance in a chemical reaction. Vinegar is acidic and bicarbonate of soda is a base and therefore a new product was formed. This new product was Carbon Dioxide, the same gas that we exhale every moment of the day. This inflated our balloon just like our breath would. 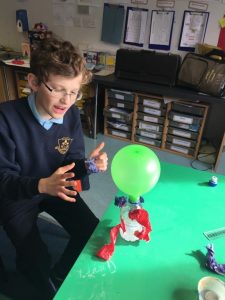 We found out that, with a bit of salt water between two layers of water, we can make an egg float within the water. Normally an egg would sink to the bottom if put into water. However we discovered that due to salt water having a different density to tap water, it allowed the egg to float!

Finally we have been learning about the newly discovered solar system, Trappist 1. It was named after the telescope that discovered it! It has seven ‘earth like’ planets which have the potential to host life!

Throughout the the first few weeks of term 4, we will be doing more fundraising. This fundraising is to contribute to the cost of our residential visit to Tomintoul. Leaflets will be going round the school and home in bags to raise awareness of each fundraiser. We have planned for four different fundraisers. These are;

Well done to all the Cross Country runners from P5 – P7. They ran really well in tough conditions, battled the elements and came out the other side with a smile on their face and a new love for running! 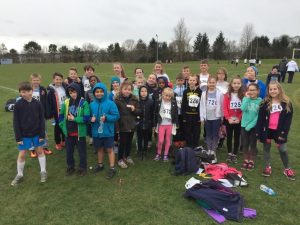 Thank you for your support throughout the term and have a safe and happy holiday.