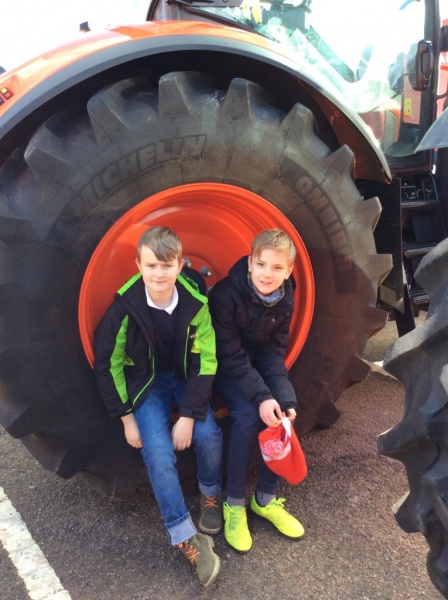 All Primary 7 pupils went to the Royal Northern Show at Thainstone on Wednesday 26th February. It was a great day of learning all about the jobs available in the agriculture and farming sector. There were lots of different stations to visit. Each group went to different sections and met with people who work in a sector linked with farming.

There were some scientists from RGU who did experiments with yeast and balloons with us to show how fermentation happens. We also saw how to extract DNA from a strawberry.

The next station was Quality Meats Scotland where we learned about red meat and why it is an important part of a healthy balanced diet.  We learned about the symbols to look out for on meat products to show it comes from Scotland.

There was a station about Dairy Farming where we learned about the traditional method of milking cows and got to try it out on a wooden cow! This was great fun to try and also hard work. We learned about what cows eat and how they are now milked with a machine. We also learned that a cow drinks a whole bath tub of water each day to help with producing the milk.

There was a crops station we visited also where we learned about wheat, barley and oats and got to feel and see the difference between them. We then had to group food according to which crop it was made from. The farmer told us about harvesting and all the work involved in being a crop farmer.

We also visited a station to learn about all the different jobs in the agriculture sector. There were much more jobs than you would think.

We also had a station where we looked at the differences between two tractors, an older one and a new one. The farmer showed us how they attach the machinery at the back and the safety features of them. He also asked us to estimate the cost of the new tractor. Someone guessed at £80,000 and was right.

There was a sheep and her baby lambs and also 2 lambs that were one year old there. The lady who was looking after them told us how their wool keeps them warm in the winter and is sheared in summer months. We then saw the wool before it is turned into clothes at a different section.

We also had some free time to look around the show at the farm machinery and some groups went into the catwalk to see the animals. Others went to the judging ring to see some more of the animals winning prizes.

Overall it was a great day. Thank you to Mrs Bain for entering us into the draw to be chosen to go to the show. Thank you also to our super parent helpers and to Mrs Robertson and Mrs Kennedy for coming with us and being group leaders. P7 have also written newspaper reports about the trip. Make sure to ask them about it when you see them.