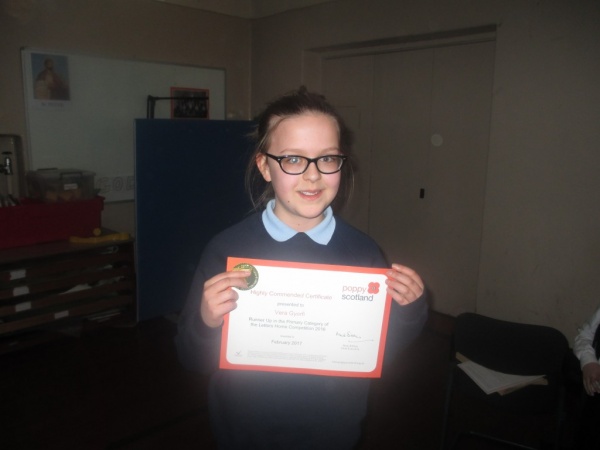 A big “well done” to Vera in P6 who came runner up in the Primary School Category “Letters Home” Competition: http://www.poppyscotland.org.uk/winners-announced-in-letters-home-competition/

In November, Primary 6 entered the ‘Letters Home’ competition where they were challenged to imagine they were a soldier writing home from the Battle of the Somme. Pupils were to focus on the power of words to express feeling and how people may have been affected by war and conflict.

Vera’s letter went through two shortlisting processes and was singled out by the judging panel above hundreds of other entries. The judging panel was led by the TV presenter Kirsty Wark and also included Mark Bibbey, CEO Poppyscotland, Ruby McCann, Chair of Scottish Writers’ Centre and Yvonne Caddell.

Vera got a special mention at Friday’s assembly where she received her certificate and prize.